As soon as Apple convened its #big #hardware #event for 2019 at the Steve Jobs Theater in Cupertino, California, US on September 10, 2019, it became a hot topic of discussion on #socialmedia. The highlights of the event were #iPhone11, #iPhone11Pro, and #iPhone11ProMax. Other announcements included, Watch Series 5 and 7th #gen #iPad, #AppleTV etc.

Apple’s event titled, “By innovation only” fired up the social media with nearly 1M+ conversations in less than 24 hours of the event.

The Voice of Customer Analysis of the #gala #tech event by #Apple revealed that it was the #live broadcasting facility on #Youtube and Apple’s official website, that got people talking. Some were quick to point out that the live #streaming of the event added to their #excitement and #anticipation of new #product launches by the brand. Some pointed out that this was the first time that Apple was streaming its product announcement through YouTube and its own website simultaneously. People were sharing links of websites that would allow others to watch Apple’s big event, live.

The most talked about themes of iPhone 11 turned out to be:

When it came to iPhone 11 Pro, the major discussions revolved around:

After iPhone 11, it was the Apple Watch Series 5 which caught the imagination of tech enthusiasts, followed by 7th gen iPad.

The discussions of #AppleWatch Series 5 revolved around:

The major discussion themes for 7th gen #iPad were: 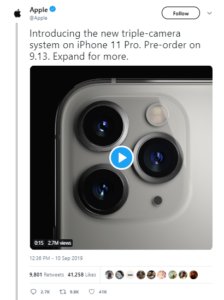 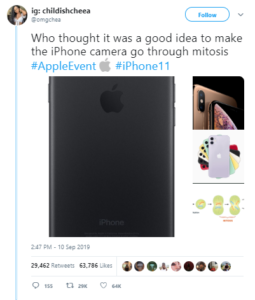 Our geographic breakdown of the conversations shows that US accounted for 87% of the total social media chatter. This was followed by #India, #UK, and #Thailand. Other nations like, #Nigeria, #Malaysia, #Canada, #SouthAfrica, etc. cumulatively accounted for 5K conversations, thus highlighting a nearly global reach of the news. 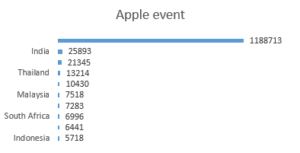 Hike in the conversation volumes were recorded around 12PM and 5PM America/New York UTC-04:00 time. 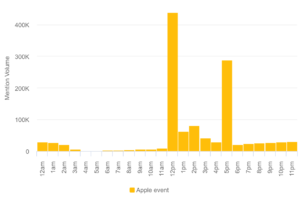 Our gender analysis revealed that men contributed more (58%) to discussions around this topic as compared to women (42%). This is in accordance to the usual norm, where tech news and podcasts are found to be more popular with men than with women.

It wouldn’t be an exaggeration to say that Apple Events turned out to be a massive success. As long as it continued, the event held the audience captive with its launch announcements being streamed live on YouTube and official website. The social media space reverberated with the echo of the applause the event earned.